The 8th Triennale of Photography Hamburg will open on 19 May 2022. Under the title Currency, artistic director Koyo Kouoh and her international team of curators, consisting of Rasha Salti, Gabriella Beckhurst Feijoo, Oluremi C. Onabanjo and Cale Garrido, will explore the "retinal age" that has taught us to see and understand the world photographically. Currency not only alludes to the common translation as currency and the meaning of the term as an economic indicator, but also means a critical engagement with photography. 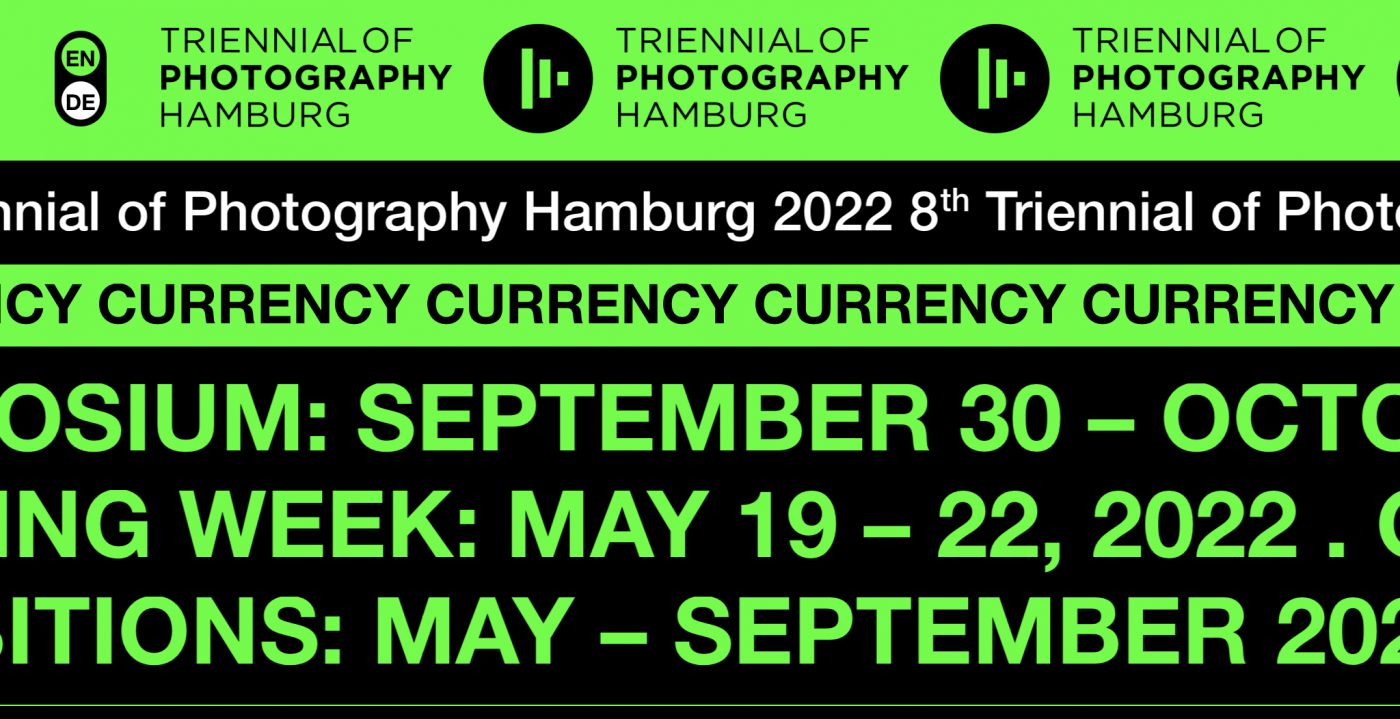 Koyo Kouoh says: "With the theme Currency, we will explore the multiple ways in which photographs are produced, circulated and interpreted. Images influence how we perceive the world and ourselves in the world. All the questions that this entails have been running through the conversations with all the participating institutions in Hamburg. The structure of the Triennale encourages great participation across the city and promises an exceptionally rich, multi-voiced and creative celebration of photography."

The theme of the Triennale will be explored in a diverse programme of exhibitions, events and a festival. As early as August 2021, the Triennale's new curated platform will publish online artistic and theoretical contributions. Also in the run-up, an international symposium on themes of the Triennale will take place in Hamburg from 30 September to 2 October 2021.

The 8th Triennial of Photography Hamburg will cover the entire city in a parcours of eleven exhibitions. The following Hamburg museums and exhibition venues are participating: the Bucerius Kunst Forum, the Deichtorhallen Hamburg with the House of Photography, the Hall of Contemporary Art and the Falckenberg Collection, the Hamburger Kunsthalle, the Jenisch Haus, the Kunsthaus Hamburg, the Kunstverein in Hamburg, the Museum am Rothenbaum - Kulturen und Künste der Welt, the Museum der Arbeit, the Museum für Hamburgische Geschichte and the Museum für Kunst und Gewerbe Hamburg. The theme of the 8th Triennial: Currency In its primary meaning, currency is an economic term for the ordering of the monetary system. Transferred to discourses of visual culture, it can be associated with "cultural capital". In their interpretation of the theme, the curators refer to Susan Sontag's formulation that a capitalist society needs a culture that is based on images and produces an enormous amount of them to stimulate consumption. The camera functions as a witness to a reality that is on the one hand a "spectacle for the masses" and on the other hand an "object of surveillance for the rulers". The curators of the Triennale extend the concept of currency to visual culture and include not only photography but also film, video and installations. Currency is intended to investigate canonisation, classification and circulation. Photography is put to the test: its influence on trade and exchange, its importance for regulation and standardisation, but also its ability to promote dissent and resistance are examined.

The Triennale programme will start in summer 2021 with the launch of the Triennale Online website, followed by an international symposium from 30 September to 2 October 2021. The opening of the exhibitions and the events of the course will take place from 19 to 22 May 2022, followed in June 2022 by a festival lasting several days with a special focus on the Hamburg photo scene. In addition, various publications are planned to appear in 2022.

Triennial Online Allegories of the Visible
The curated web platform is a place for theoretical exchange and artistic reflection. It complements the theme of the Triennale through critical texts, visual contributions and commissioned digital works. The website will go online in August 2021 and will feature contributions from international artists and critics, scholars and photographers.

Three themes will be explored at this symposium: Fields of Perception explores the photographic impetus, the social function of photography and the ethics of its viewing; Narrative Currents questions the relationship between metaphorical and literal attributions of photography and its narrative potential; Image as Currency critically discusses the notion of currency as value creation and reflects on the production, dissemination and use of images.

Festival Photography: The Register and the Recital
The festival will take place in June 2022 under the title Photography: The Register and the Recital. It will bring together the central motifs and components of the Triennial in terms of content and make them accessible in a multifaceted programme of lectures, discussions, presentations and film screenings. The festival will be held at various venues along the route.

Photo Scene Hamburg
The 8th Triennale will involve the local photography scene and offer a stage to Hamburg-based photographers, artists and collectives. Selected projects dealing with the concept of currency are eligible for funding. For more information on the planned Open Call, please visit www.phototriennale.de from autumn 2021.

The curatorial team of the 8th Triennial

Koyo Kouoh is the artistic director of the 8th Triennale of Photography Hamburg. Born in Cameroon, Kouoh has been the director and chief curator of the Zeitz Museum of Contemporary Art Africa (MOCCA) since March 2019. She was the founder and artistic director of the RAW Material Company in Dakar and a member of the curatorial team of Documenta 12 and 13. She is responsible for numerous publications and organises international exhibitions as an independent curator. In 2020, she received the Swiss Art Prize Prix Meret Oppenheim for her work.

For the realisation of the Triennale, Koyo Kouoh has appointed an international team consisting of:

Rasha Salti
is a researcher, author and curator of art and film. She lives and works between Beirut and Berlin. Salti has curated film programmes worldwide, from MoMA in New York to the Haus der Kulturen der Welt in Berlin. In 2011, she was one of the co-curators of the Sharjah Biennial. She is the author and editor of numerous publications, including the book I Would Have Smiled: A Tribute to Myrtle Winter-Chaumeny with Issam Nassar, dedicated to the legacy of the British photographer and founder of the UNRWA photo archive.

Oluremi C. Onabanjo
is a curator and scholar of photography and the arts of Africa. Formerly the director of exhibitions at the Walther Collection in New York, she has organised exhibitions in Africa, Europe and North America. She lectures internationally on photography and curatorial practice, and her writing has appeared in Aperture, Autograph ABP, The New Yorker, The Photobook Review and Tate Etc. Onabanjo was an Andy Warhol Foundation Arts Writers fellow in 2020. She is a PhD candidate in art history at Columbia University.

Cale Garrido
is a freelance journalist, photo editor and curator based in Hamburg. She works internationally on documentary and fine art photography projects, exhibitions and publications. She has already worked as an assistant curator at the 7th Triennale der Photographie Hamburg 2018. She curated exhibitions at the Kaunas Photography Gallery and the Brandenburg State Museum of Modern Art in Cottbus.

Further information on the 8th Triennial of Photography Hamburg 2022 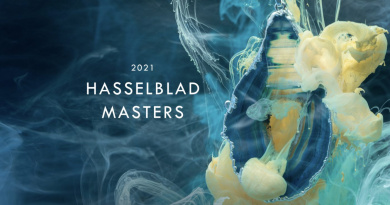 The Hasselblad Masters is one of the world’s most prestigious professional photographic competitions, giving acclaimed professionals, as well as aspiring newcomers, the chance to make their mark in the world of photography. The competition consists

Film Talk #5, Cinema for Moabit as guest at AtelierGalerie IBERART

Kino für Moabit invites you to the 5th FILMGESPRÄCH ENTLANG DER TURMSTRASSE. On 30 March (beginning at 7 pm) they will be guests of the artists Liana Nakashidze and Mirian Gomeli (Japaridze) at the Atelier 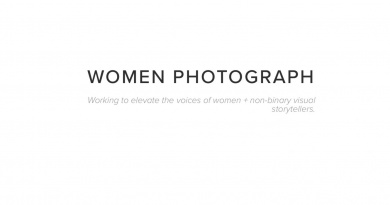 Women Photograph has partnered with Getty Images to award a $10,000 scholarship to a student focused on photojournalism. The scholarship funds can be used for tuition, camera equipment or other education costs during the 2020-2021 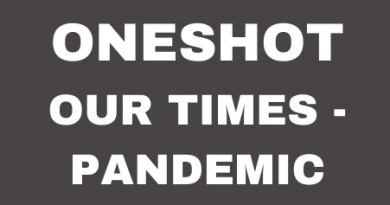 There is no doubt that the past year has been an unprecedented time in our history, overshadowed by a global pandemic that has affected every aspect of life across the globe. This edition of IPA’s 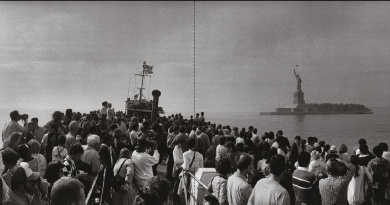 Abe Frajndlich (*1946, Frankfurt am Main) is known internationally for his portraits of famous people such as Jack Lemmon and Stephen Hawking. Since moving to New York in 1984 the city itself has been one of 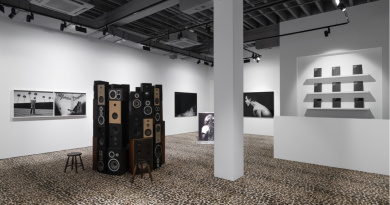 Almine Rech Shanghai is thrilled to present ‘Sun of Sound’ by acclaimed French multi-disciplinary artist, photographer and fashion designer Hedi Slimane, the fifth solo exhibition of Slimane’s work at Almine Rech since 2004 and his