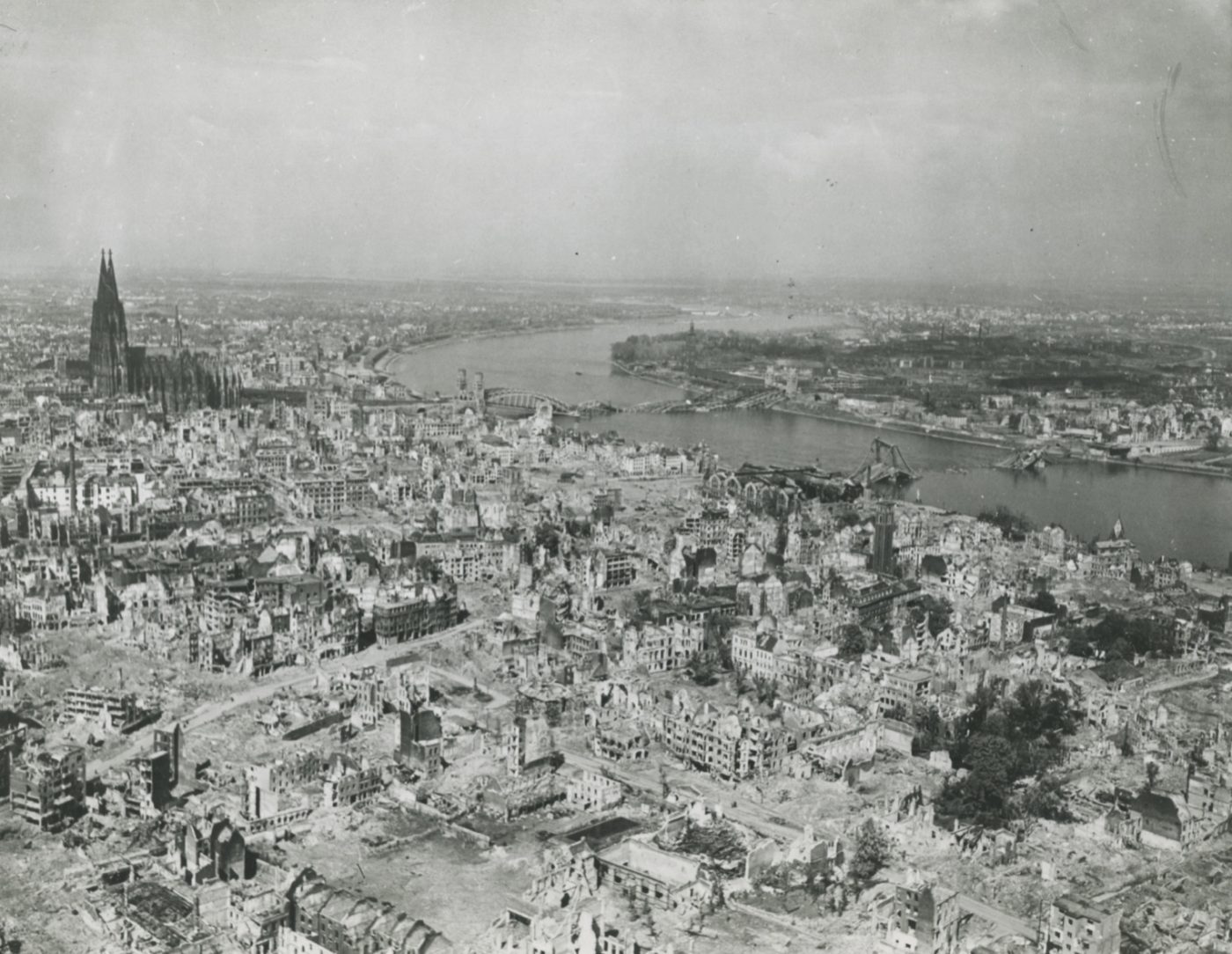 The Second World War ended for Cologne’s population on the left side of the Rhine on 6 March 1945. After almost six years of war and twelve years under Nazi rule, Cologne is in ruins and resembles a ghost town. The old town is destroyed and almost none of the buildings are still habitable above ground. The sanitary conditions are disastrous. The electricity, water and gas supplies are not working anymore. Hunger, privation, exhaustion and disorientation shape the people’s daily lives. The city’s residents have to get to grips with the new challenges of life. The confrontation with the Nazi past and questions about personal culpability in the regime of terror are secondary at first.

The period from 1945 to 1948 holds many challenges in store for the people. They are told in stories of everyday life – they are also the stories that this exhibition is about.

They are about the rebuilding of the city, its infrastructure, at first and most urgently the removal of the rubble from the streets. This is primarily accomplished by companies, but the people of Cologne also volunteer under the motto ‘Shovelling, shovelling is now trumps’.

Under Allied supervision the city’s political structures and administration are re-organised. In October 1946 the first democratic elections after the war are held: the city’s first elected mayor is Hermann Pünder. The old Nazi elites are to be excluded from the rebuilding efforts: a denazification is attempted in Cologne and the British zone too.

The exhibition is also about the stories of cultural revival: exhibitions and plays are staged, there is song and dance, and there is even a football match against a British team.

However, everyday life is shaped by hunger and hunger demonstrations, the longedfor reception of CARE packages, by ‘fringsen’ and trading on the black market. A special piece of contemporary evidence is the accounts book kept by Willi Rees from Cologne. He records his income and expenses on the black market in the first few years after the war – cigarettes are the currency that is used. A CARE package and its unopened contents demonstrate the first humanitarian assistance and the privation. Rubble from the war and an aerial bomb – discovered in 2011 as an unexploded ordinance during construction works at Waidmarkt – and many other objects of the post-war period tell stories. Photographs and posters provide a vivid picture of everyday life. They depict the city in ruins, but also Cologne as it rebuilds.

The exhibition is supported by museums and collections that expand the presentation with objects and photographs. We wish to extend a big thank you to the NS-Dokumentationszentrum, the Römisch-Germanisches Museum, the Museum Schnütgen, the Historisches Archiv der Stadt Köln, the Dombauarchiv as well as to Cologne Cathedral and Dombaumeister Peter Füssenich, the Stiftung Bundeskanzler Konrad Adenauer Haus, the Landesarchiv NRW, the Süddeutsche Zeitung Photo and the Archiv Wim Cox.

The author Heinrich Böll, who was from Cologne, put it succinctly: ‘The war will never be over for as long as a wound it created is still bleeding.’

Many of these wounds still have not fully healed – not just in the cityscape. The war wounds of the city are shown in the exhibition, captured by the Rheinisches Bildarchiv Köln: in a series of photographs of plots with underdeveloped buildings, rubble mountains, but also of memorials that still serve as reminders of the victims and atrocities of the Nazi regime.

This exhibition, which starts at the end of the war and continues until the year of the currency reform in 1948 and which presents everyday life in ruins, is an important project that has been realised thanks to the fantastic support of the entire team at the Kölnisches Stadtmuseum and many other committed individuals. Special thanks also to Mario Kramp, Rita Wagner, Philipp Hoffmann, Andrea Habel-Schablitzky, Jörg Borger-Besser and the team of restorers, our museum educator Ipek Sirena Krutsch, the artist Annemarie Krätz for the poster, flyer and exhibition graphics and the team in the museum management.

We also wish to thank our extended co-operative partners: the Forum für Willkommens Kultur (a project by the Kölner Flüchtlingsrates e.V. and the Kölner Freiwilligen Agentur e.V.) and the LiK-Archiv Böll of the Stadtbibliothek Köln. Last but not least we wish to thank Rüdiger Müller and René Schulz for the design and implementation of the accompanying publication. 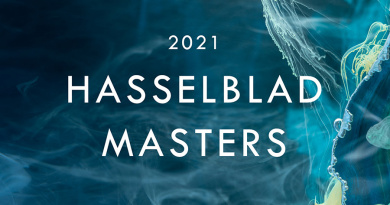 Renowned as one of the most prestigious professional photographic competitions, Hasselblad Masters is now open for submissions starting today and closes on 31 July 2021. Entrants are able to submit three images in as many categories 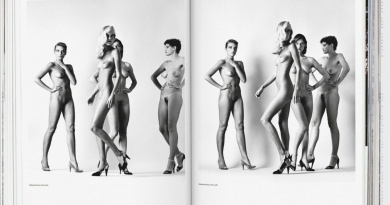 BABY SUMO, welcome to the world! The legendary Helmut Newton SUMO in a spectacular new edition

The Helmut Newton SUMO was overwhelming in every respect: a 464-page homage to the most influential and controversial photographer of the 20th century, and a book that broke records for weight, dimensions, and resale price. 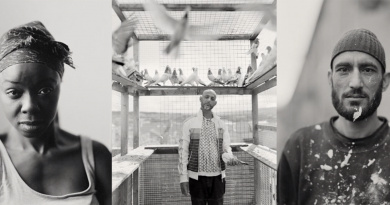 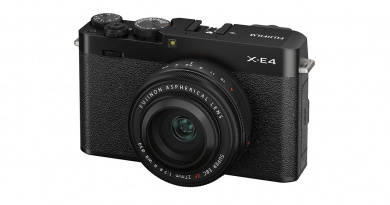 FUJIFILM Corporation is pleased to announce the launch of the mirrorless digital camera “FUJIFILM X-E4” (X-E4), the latest model to join the X Series of compact and lightweight digital cameras, known for superior image quality delivered 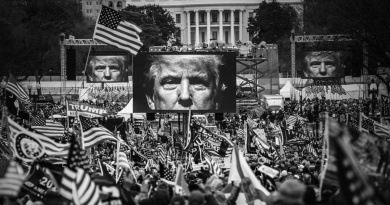 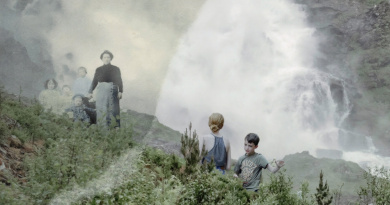 The Prix de la Photographie, Paris (P×3) and State of the World Competitions Announce Winners of 2021

The Prix de la Photographie, Paris (P×3) and State of the World photo competitions have now announced the winners of 2021. Visionary photographers from around the world, both professional and amateur, shared their unique perspectives