Based in Vienna, Austria, Andreas Franke has been named one of the 200 Best AD Photographers Worldwide. Known for pushing the boundaries of commercial photography, diving is his true passion.

In 2010, Franke merged his talent with that passion to create The Sinking World project, through which he captures the poignant beauty of ships sunk to create artificial reefs. He begins by photographing these giants, such as the former USS General Hoyt S. Vandenberg near Key West, Florida, at the bottom of the sea. Next he composites them with scenes shot in his studio to create alternative realities that capture the spirit of the ships.

Since 2011, Franke has carried out three Sinking World projects: on the wrecks of the Vandenberg, the Stavronikita and the Mohawk. The projects were supported by exhibitions  in the United States and Europe, both underwater and on land. 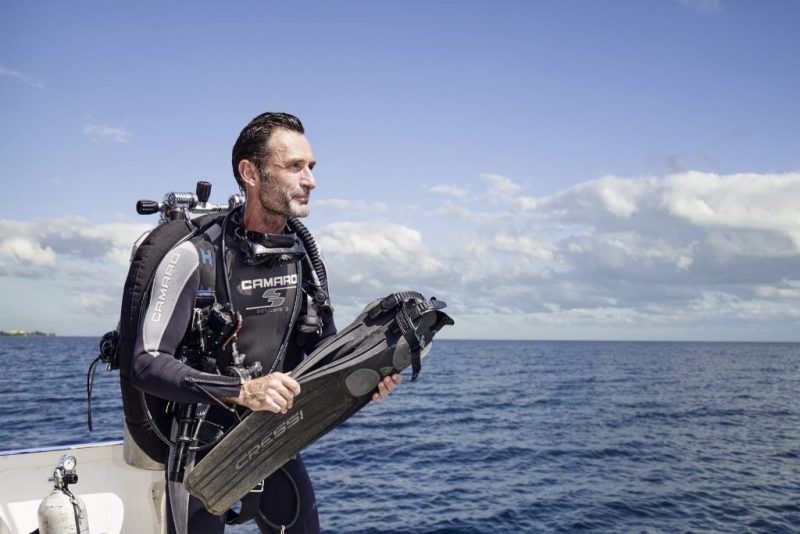 Andreas Franke is a photographer. Father. Passionate diver. He travels the world and has always enjoyed the unmistakable beauty of nature. He took tons of pictures of this beauty. This is what he is doing best.

Catching moments, impressions, feelings with his camera. Creating photographs is his way of dealing with a subject. And it is how he can bring attention to the problem of plastics in our oceans.

With his art, he does not want to shock anyone, but rather to draw attention to a subject to make people think.

He believes that humanity has learned to repress shocking images. The more frightening the pictures, the more ineffective they become in the end.

From this, developed Andreas Franke’s idea for the Plastic Ocean Project. 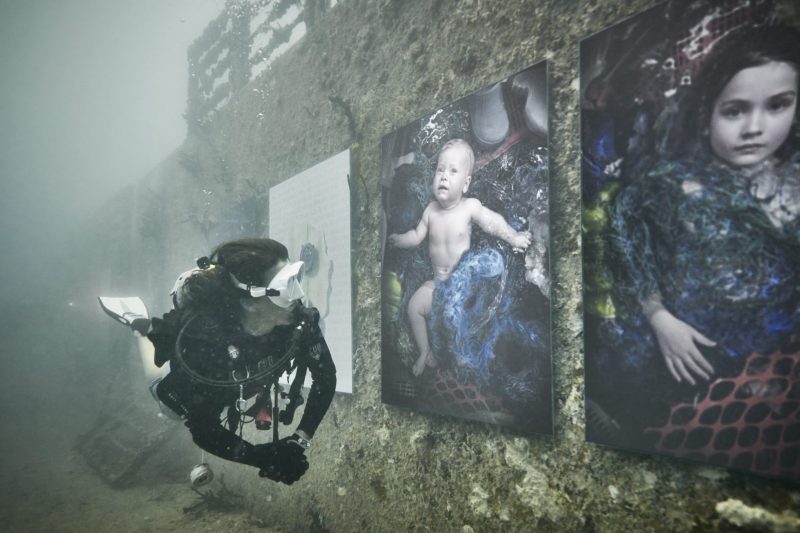 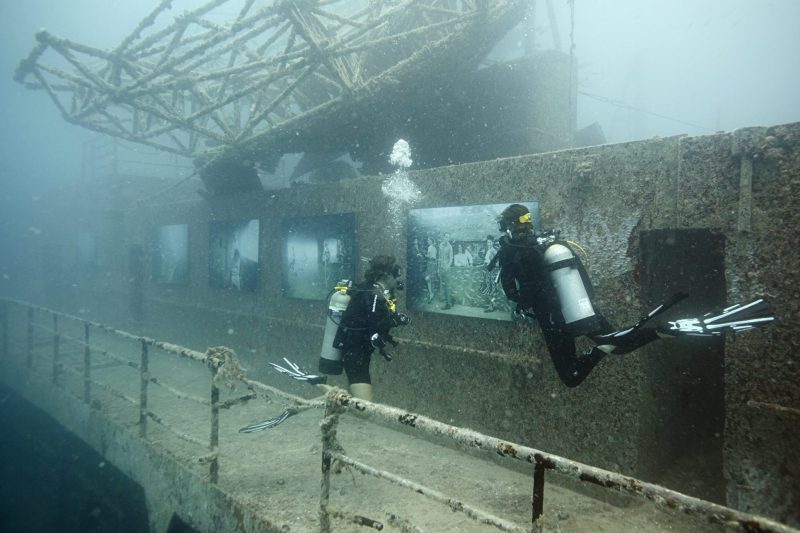 „With my photographs of The Sinking World, I want to pull the spectators into unreal and strange worlds. Ordinary scenes of the past play within a fictional space and become dreamworlds you can get lost in or you can identify with“ 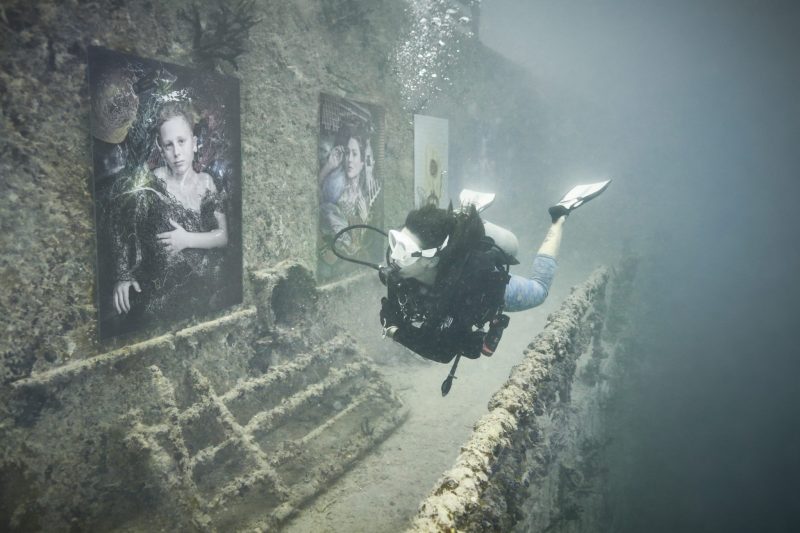 “Representing everything that is beautiful in this world, I show beautiful people. Representing our future, I show our next generation. I show both groups in the water among plastic garbage, which was collected along the coast of Italy in a single day. Through the next set of images, I isolate individual plastic items from the first series and juxtapose them with facts to create more awareness about the extent of the plastic problem in our oceans.”

In order to give the whole project even more impact, Andreas Franke shows his artworks where our plastic problem is most acute: in the sea.

More specifically, as an underwater exhibition on the wreck of the USS Vandenberg off the coast of Key in 2019, where they could be viewed by anyone willing to dive into the depths. Once the images were retrieved from the sea and dried, they were displayed on land.

“With the unique patina developed during their months under the sea, to give non-divers a glimpse of the beauty of the ocean and the creatures that live within it in the hopes that they will be inspired to help.“ 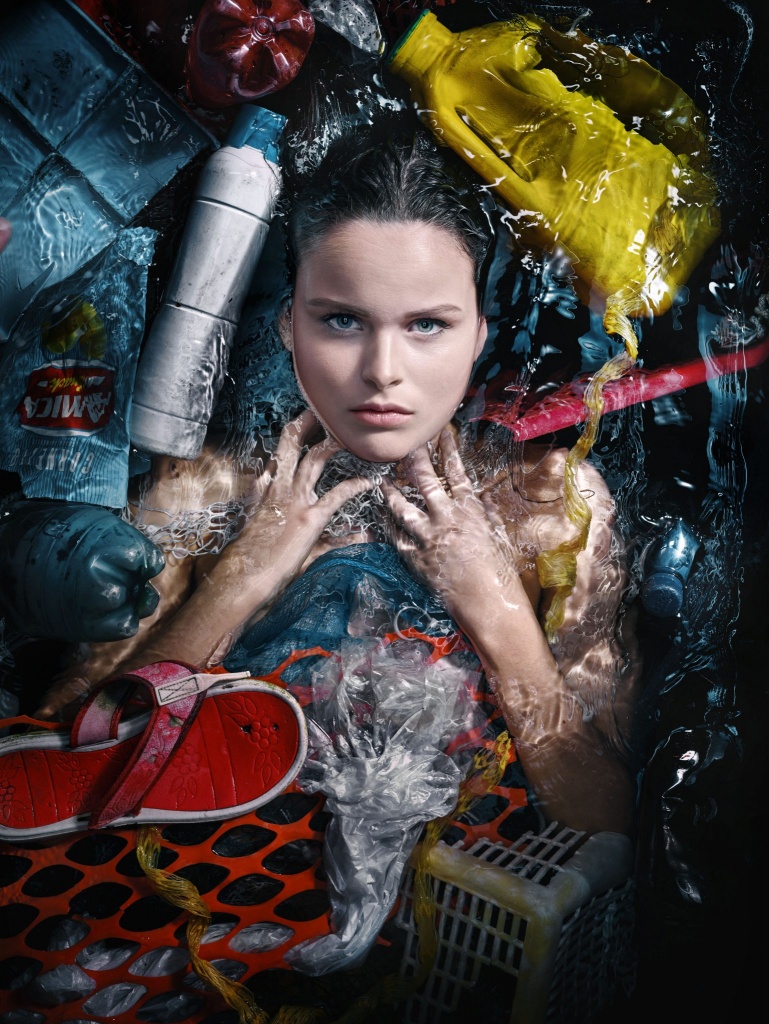 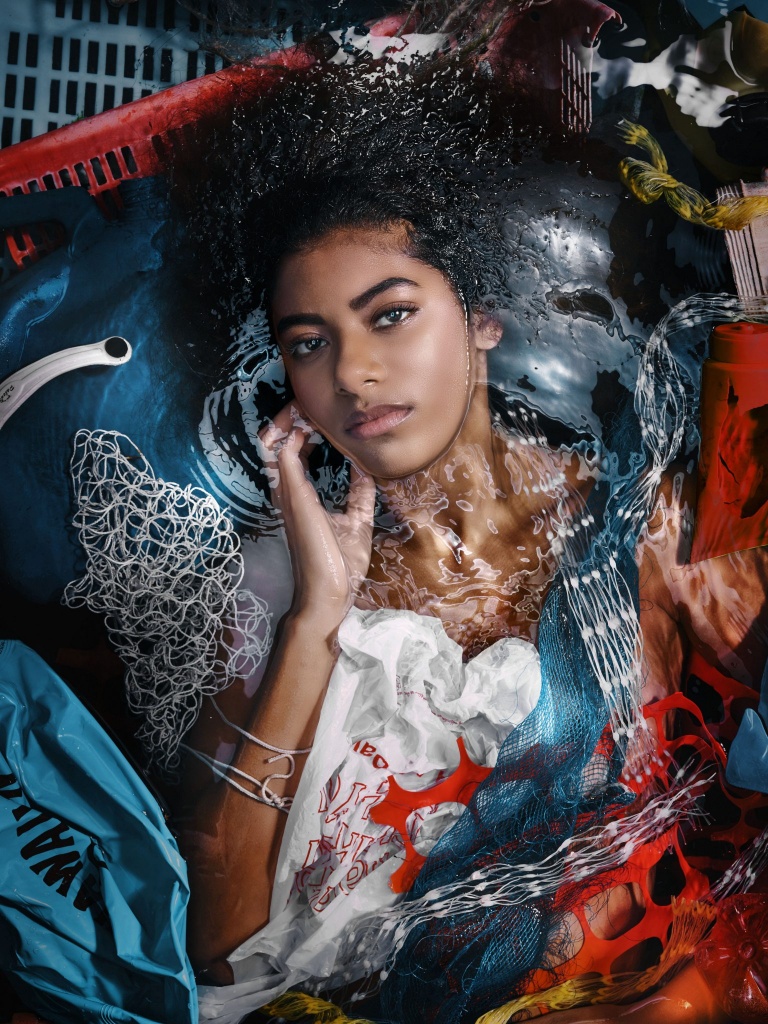 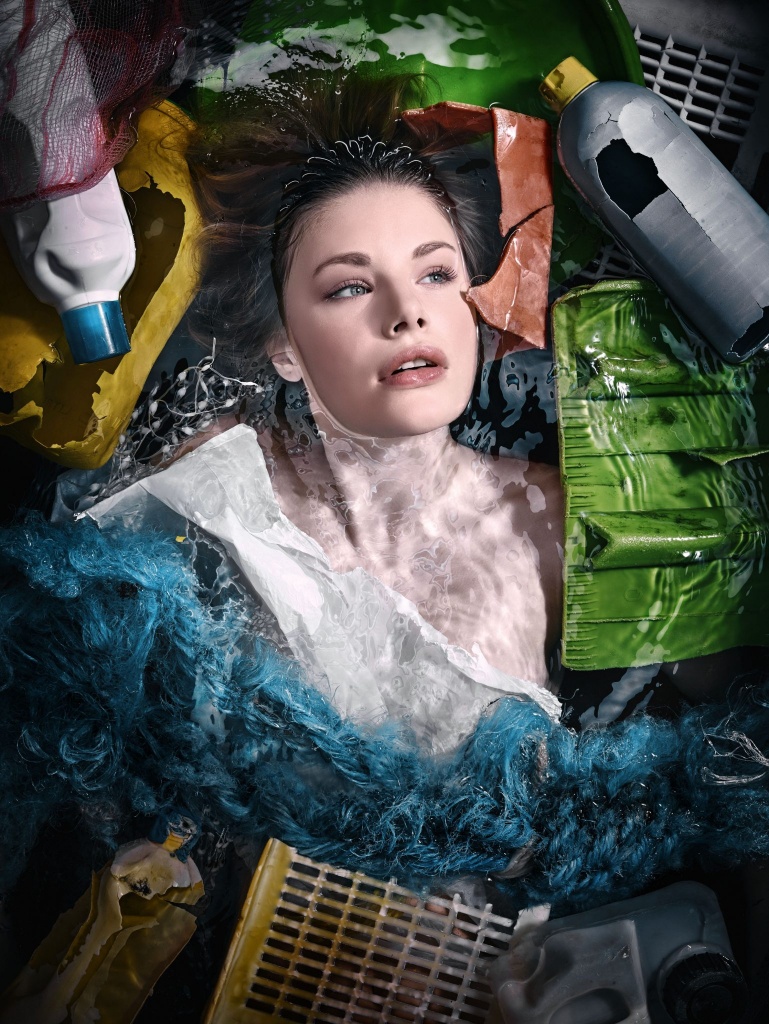 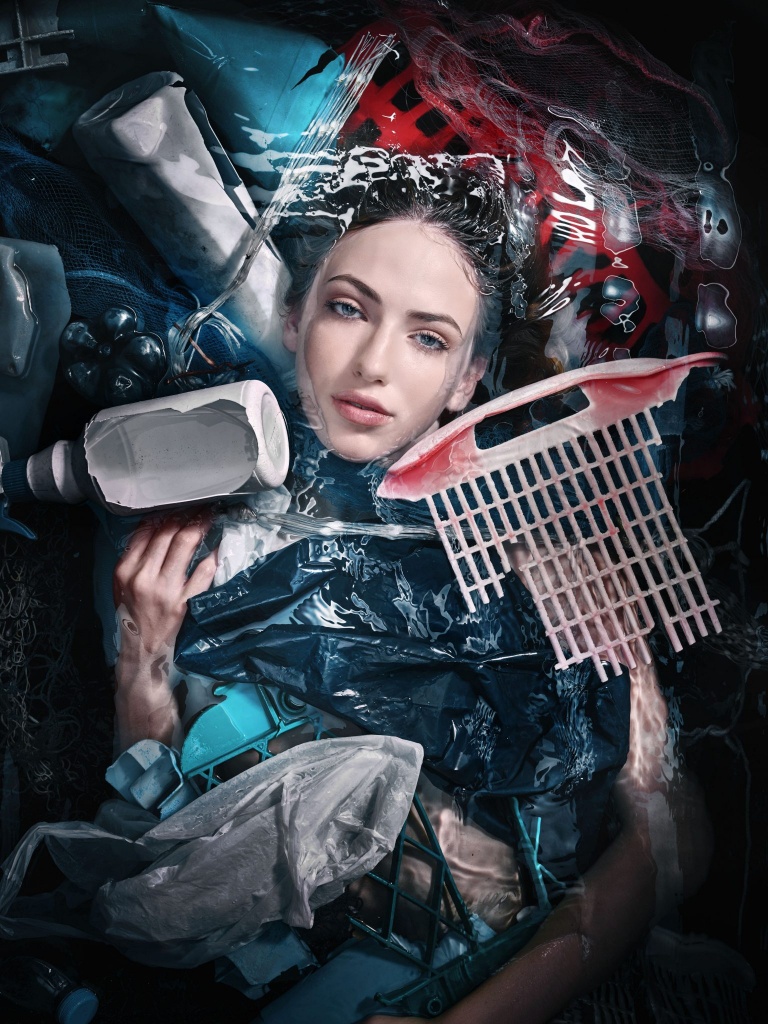 Be part of the solution: Everyone says, “I can’t solve such a big problem alone,” but I’m convinced that we can. Each of us can contribute in our own way. Just like companies and governments. Is all of this plastic really needed? What could be the alternatives? We have to stop using our oceans as rubbish dumps, and we all need to work together to preserve the beauty of Planet Earth for our common good and try to make our lives plastic free!“ Andreas Franke 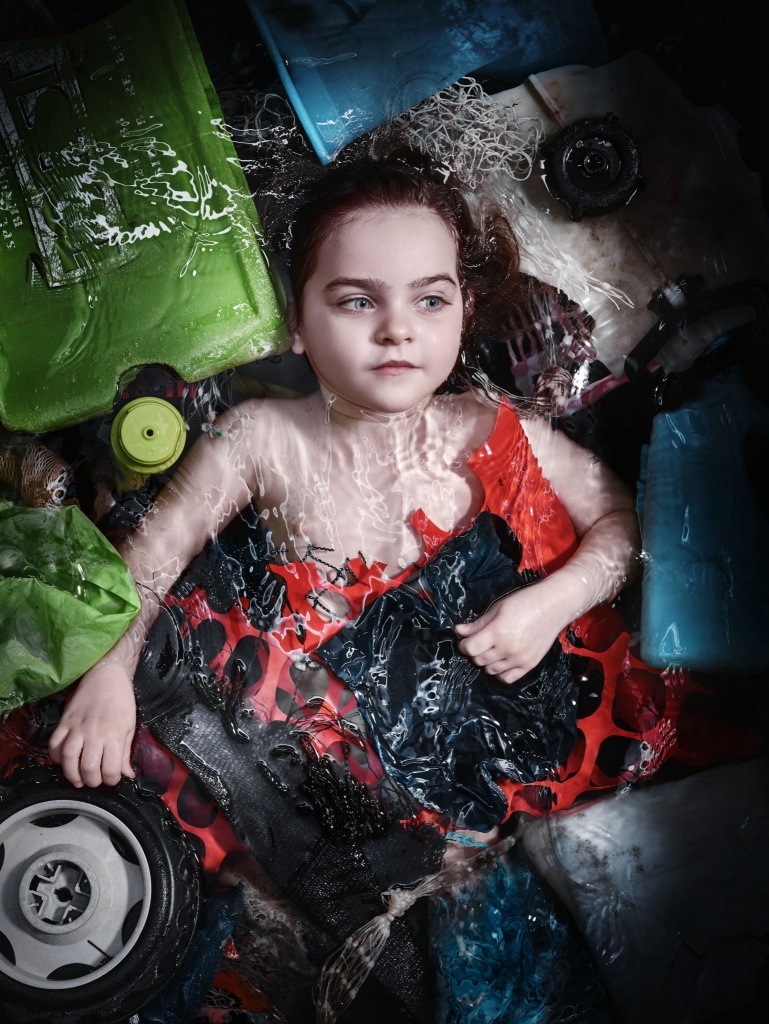 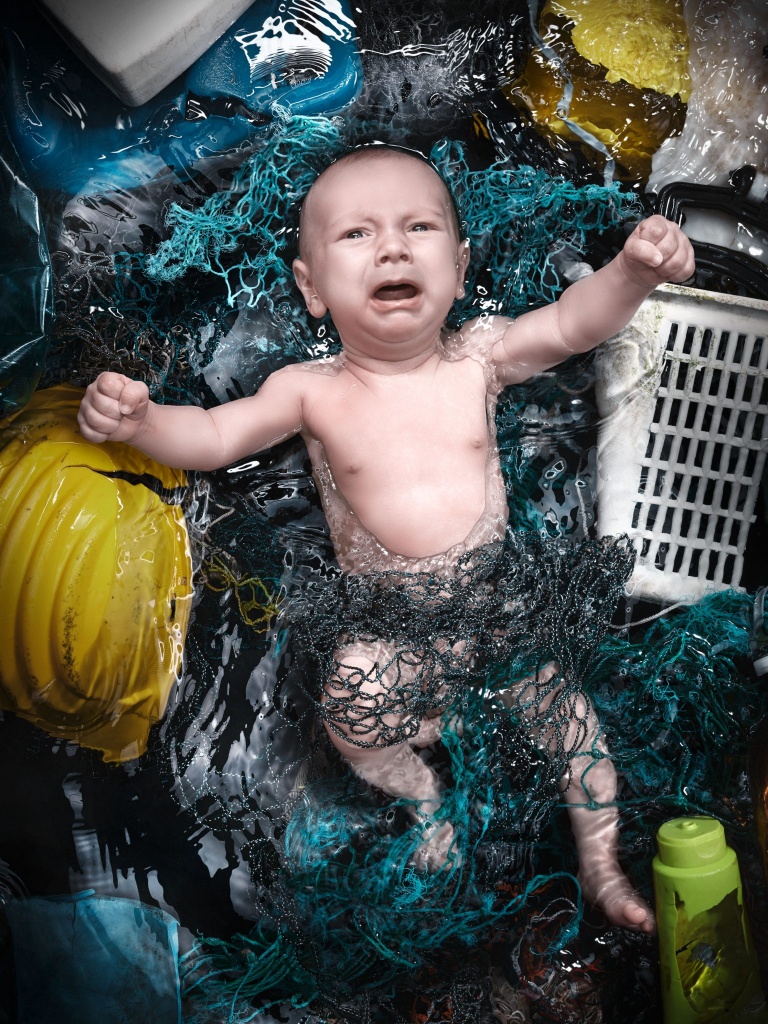 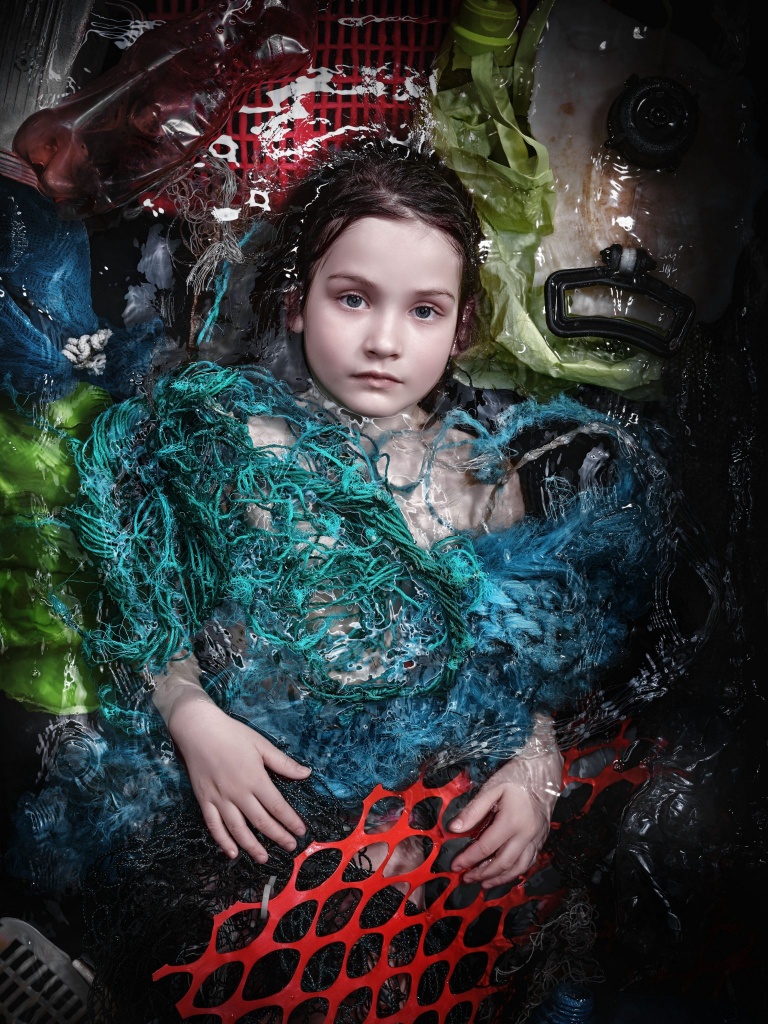 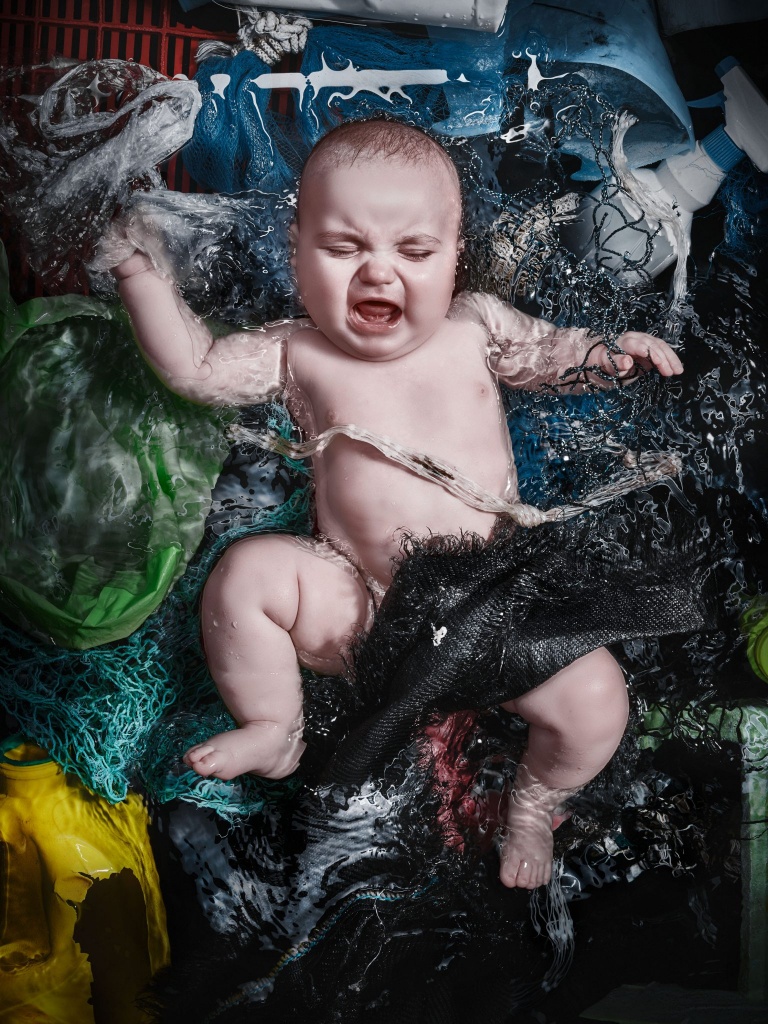 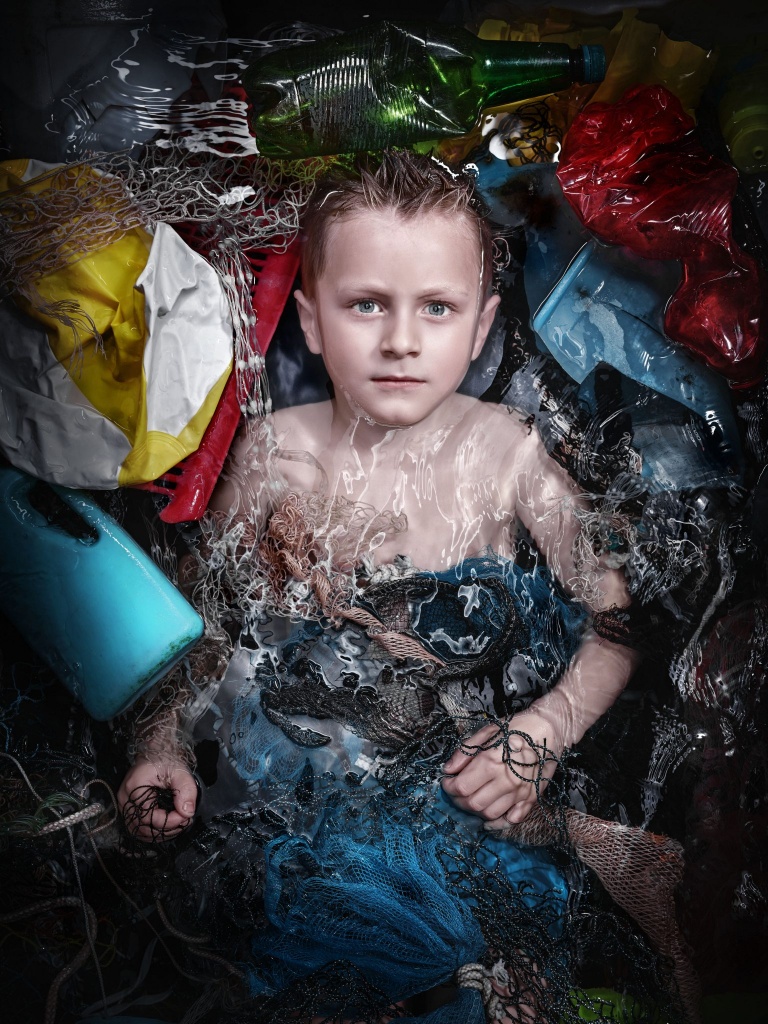 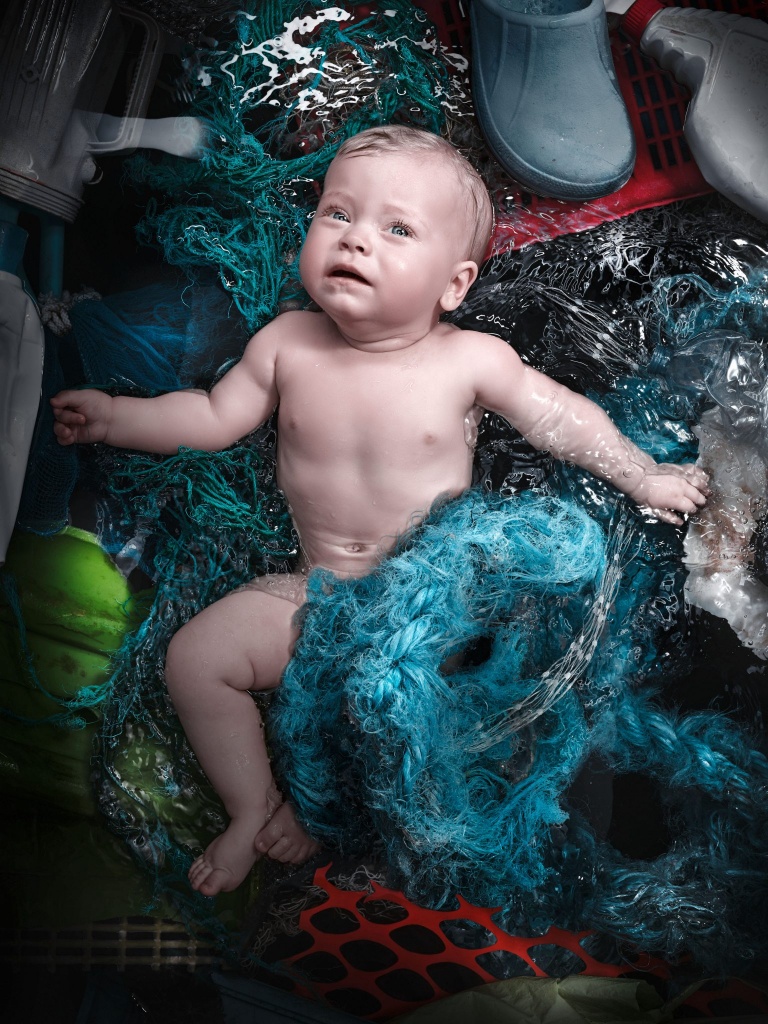 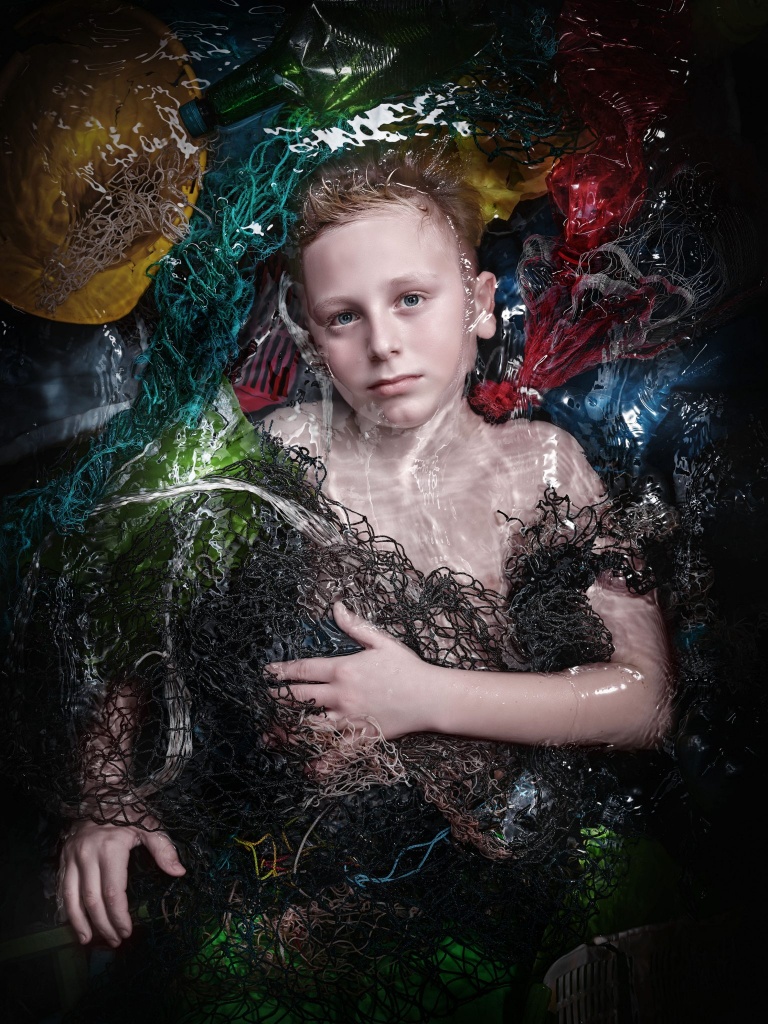 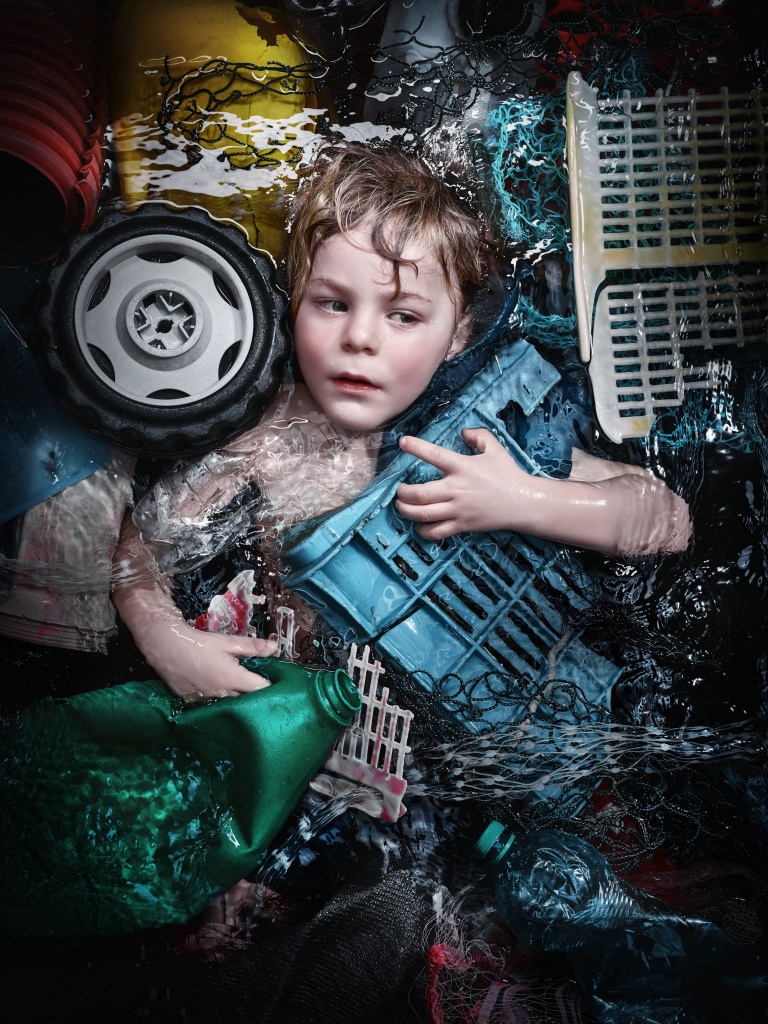 An underwater gallery not only holds divers spellbound. The ocean leaves peculiar and impressive traces on the pictures.

The weeks and months underwater bequeath Andreas Franke’s works with a special, unique patina that beautifies them and leaves a strange touch of impermanence.

The sea dresses the pictures in strange suits. Salt, algae, and microorganisms from below gather to adorn the pictures from the world above with the signature of the ocean. Eventually, the mysterious and oddly ennobled beauties surface to be seen on land.

The Plastic Ocean exhibition has been shown underwater aboard the wreck of the USS General Hoyt S. Vandenberg off the coast of Key West, Florida (24.27 N, 81.44 W) 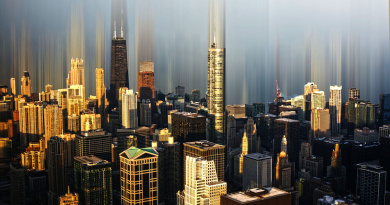 American Spectacles by Sadiq A. AlQatari

There are major urban areas across US vast land, not only small peaceful countrysides, romantic and quiet towns large, but also wild cities full of activities that amaze and attract amateurs as well as professional 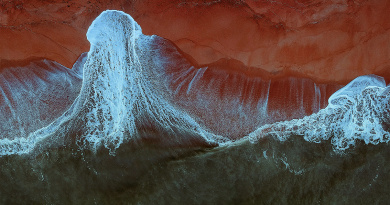 The basis of the work by Hermann Fuchs on abstract photography is not a conceptual but an aesthetic approach. “The intention is to further develop the understanding of abstract painting with photographic and image-forming means. 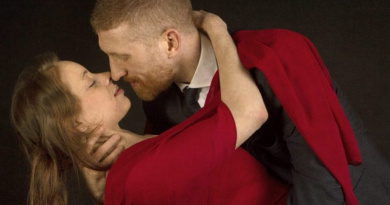 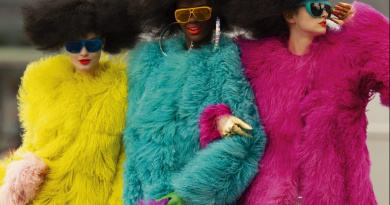 Women as Fighters by Hans Feurer at CAMERA WORK Gallery

Hans Feurer presents women as fighters who are much stronger than men. To put these »dream projections« on the scene, he only uses natural light—even for night shoots. This shapes his own effortlessly personal note 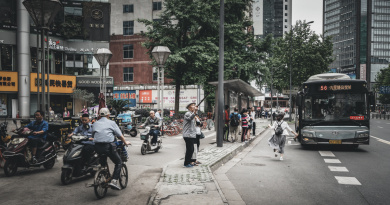 This series of photos was taken in May 2019 at Chengdu, the capital of southwestern China’s Sichuan province. Chengdu is known to be one of the happiest cities in China and has many famous sites 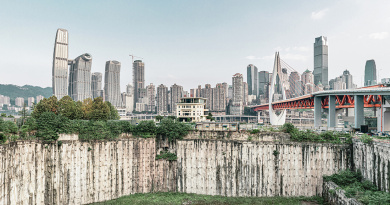 VIPA announces the winners of the first competition. We are pleased to present the 1st place winners of the Editorial category. After holding international photography exhibitions, a history of artistic achievements, and cultural relations with